Don't have time? We'll do the analysis for you.

Let Anova do the statistical analysis to get the feedback you need right away, without lifting a finger. 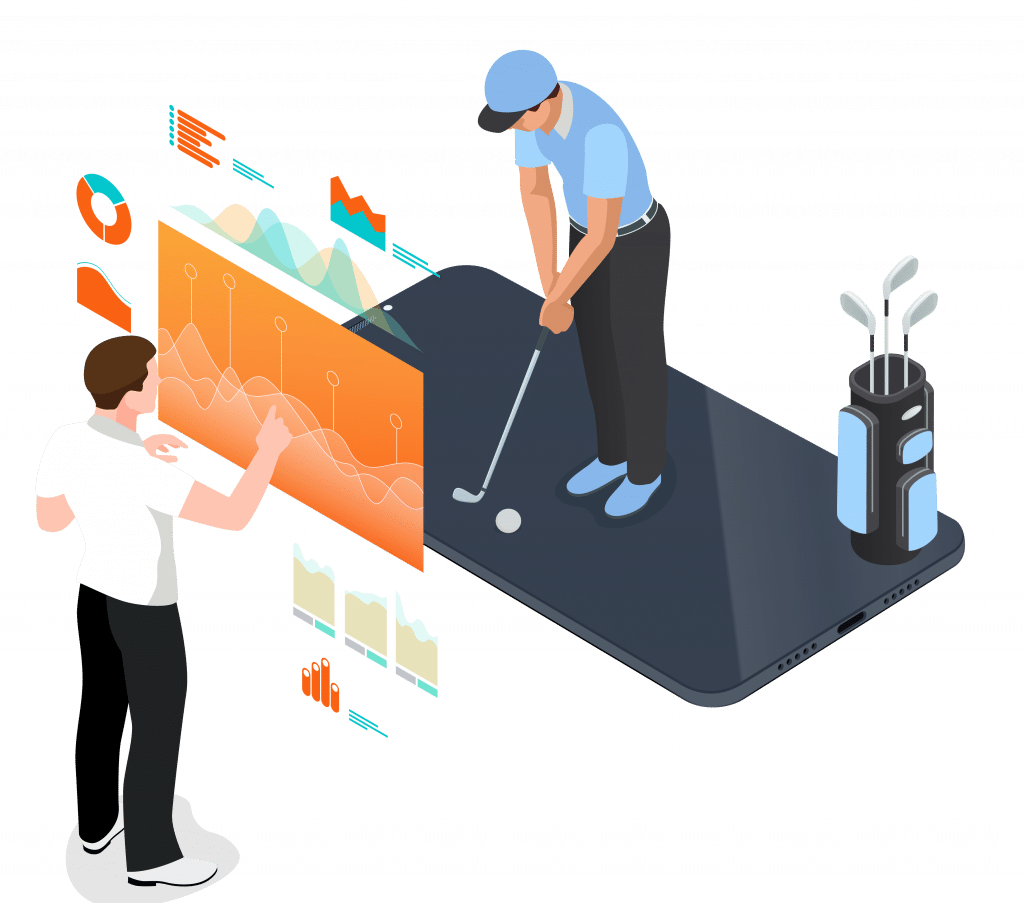 At Anova, we also provide tailored services that take the effort out of creating your analysis, strategy, implementing actions and provide continued support.

Let Anova do it for you.

Not got the time to do your own analysis this month? The Anova Golf team can help you decipher the numbers and provide you with an analysis ready to go. We can do anything that’s needed to take all the pressure off you.

Talk to the team

Want to find out more about Anova’s Done For You services? Book in a short call with us and we’ll talk you through everything.

Super fast Round Entry for your players

96% of college coaches using Anova.Golf say that we had a positive impact on their team’s performance.

84% of our college coaches are ‘extremely satisfied’ with our customer service.

See every shot your player hits in practice and competition.

It’s impossible to see every player’s every shot live. We help you bridge this gap by generating comprehensive lists of each shot your player hits during their rounds and groups them according to shot category: Off the Tee, Approach the Green, Around the Green and Putting. It’s the next best thing to you being there and watching the shots live. 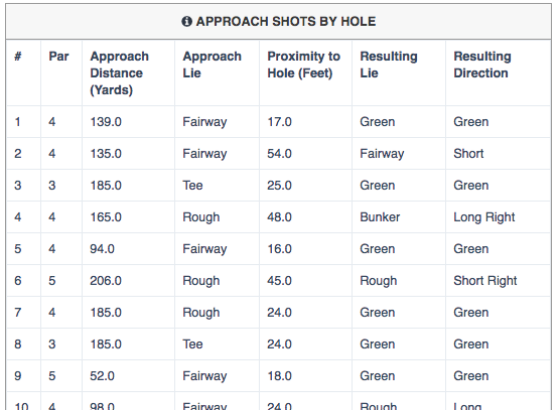 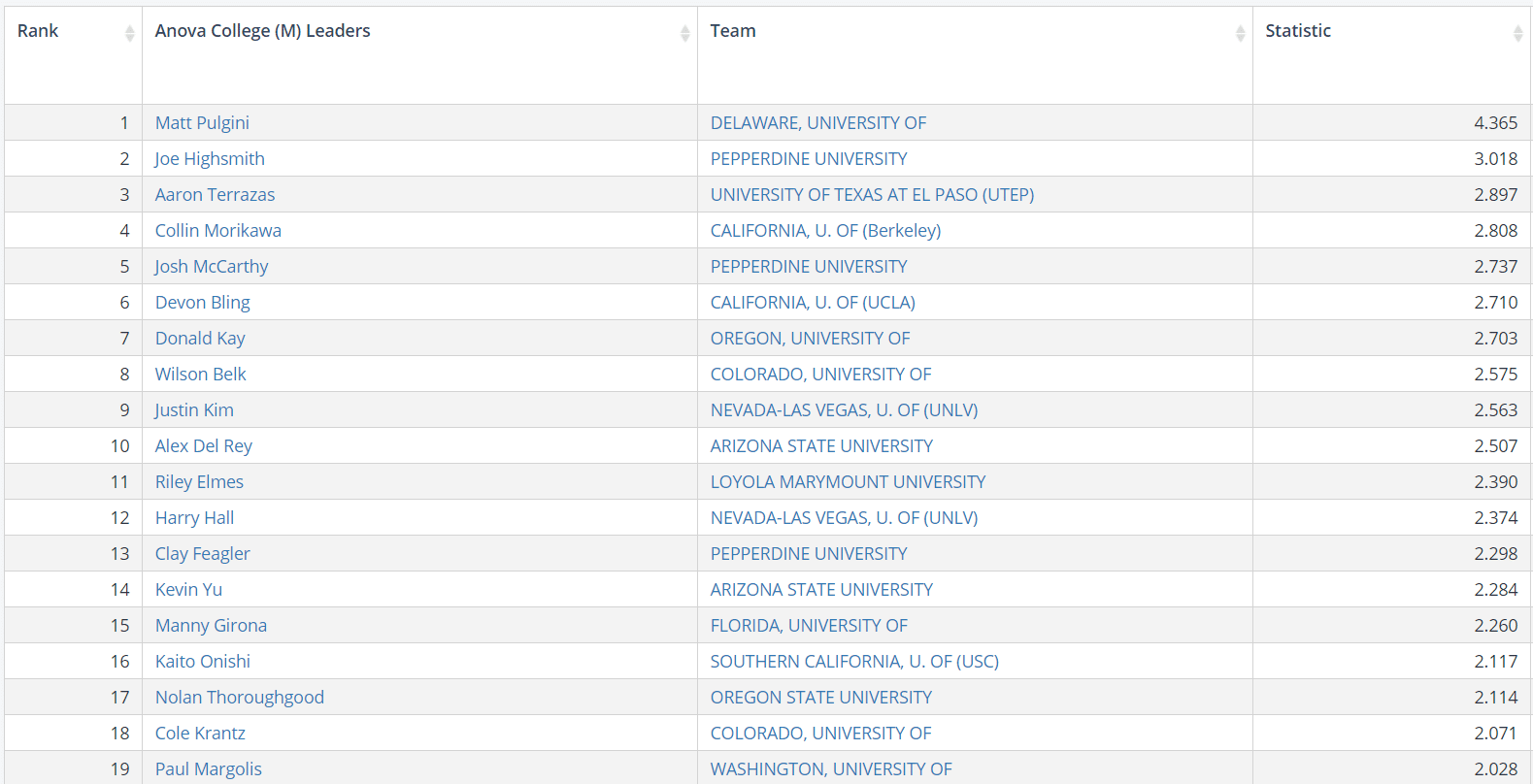 College Strokes Gained for men and women, and also against their own teammates

We really like the Strokes Gained methodology because it captures the nuances in golf that are otherwise often failed to be measured. However, comparing to a male tour player is in most cases not the most relevant comparison to be made.

Anova helps you put your players’ performances into a relevant context by calculating separate Strokes Gained variables that directly compare them to their peers, and against their own teammates.

What our teams say

Anova allows our student-athletes the opportunity to directly compare themselves to their competition. It has been a great way to help them understand where they are strong in their game and where they are lacking if they want to compete with the best in college golf.
Jon ReehoornOregon State Men's Golf Coach
Anova provides the critical statistics to really break down a player's game. The strokes gained information, along with comparative data is great feedback to really pinpoint areas of strength and weakness. The team at Anova are also open to feedback and are extremely responsive in both technical and analysis questions that we very much appreciate.
Jan DowlingUniversity of Michigan Women's Golf Coach
"We set the 54-hole school record by 3 strokes today! Anova is really helping! I basically changed what we do in practice. It's been about a month since we started using Anova when the season began and two weeks since I had enough data to structure practices. I can't wait to see us go even lower!"​
NCAA D1 Women's Coach
Anova clearly tells us where our players are doing well and where they can improve, it’s great to get instant feedback with Tour type strokes gained data right after a round
Brandon MillerKeiser University Men's and Women's Head Coach
Anova allows our golfers to get tangible feedback from each round and tournament, use that data to construct practice plans and attack weaknesses in their golf game. Also this information allows us to easily see trends and know that work in specific areas is producing results over time. Without Anova these opportunities for improvement would not be possible.
David NuhnUniversity of Idaho Men's Golf Coach
Previous
Next
We’ve been using Anova for almost two years now and the statistical feedback for our staff and players is second to none. Every practice we conduct is built using our Anova statistics.
Tommy BakerJames Madison University Women's Golf Coach
The ease of using Anova along with the information it provides is unparalleled in golf statistical software. We truly view it as a competitive advantage for each of our players, and really allows us to have more focused practice and game improvement strategies.
Mitch WilsonKalamazoo College Golf Coach
The Anova team do a great job with providing feedback and explaining data in each category. It has been valuable for our guys to be able to track their own progress and also how it stacks up against their peers across the conference.
Dustin WhiteWashington State University Men's Golf Coach
Anova is simple and easy to use. It provides us with the necessary feedback to develop plans for each player to improve their skills.
Jay MoseleyOhio State University Men's Golf Coach
The Anova Platform has not only provided myself and our coaching staff vital information on the players progress but has been a real opportunity to educate our players on how they can take responsibility to improving their game.
Val VerhunceSonoma State University Men's and Women's Golf Coach
Previous
Next

We regularly write blogs and newsletters about golf statistics and how to get better faster. Sign up today to say in the loop.